This survey ran from February 27th to March 23rd, 2020, with two parts released simultaneously that were filled out independently. Participants could fill out one and not the other if they so chose. Each survey was comprised of a mix of qualitative and quantitative questions. You can find archived copies of the first half of the ranger survey here and the second half of the ranger survey here.

All survey results were given to Senior GameMaster Estild, who is in charge of the development team at the time of this writing. In addition to that, I have worked to summarize the results of the survey similar to how Leafiara summarized the Cleric Survey in 2019. I strove to reflect all viewpoints while also not misrepresenting the number of individuals who felt a certain way.

As Leafiara wrote in the cleric survey, I’ve also highlighted comments that stuck out as exceptional for being either:

Comments were chosen for quality over quantity; if ten people said to replace 311 Blind (not a real example) and one person said to keep it, at best I only include one comment from each perspective. (The exception would be if some of the ten give different reasoning to their arguments.) Emphasizing how many people simply like or dislike a spell or other element of clerics was left to bar charts instead of quoting anybody and everybody.

In an attempt to support those who may be using a screen reader, all charts have also been described in text below the image. 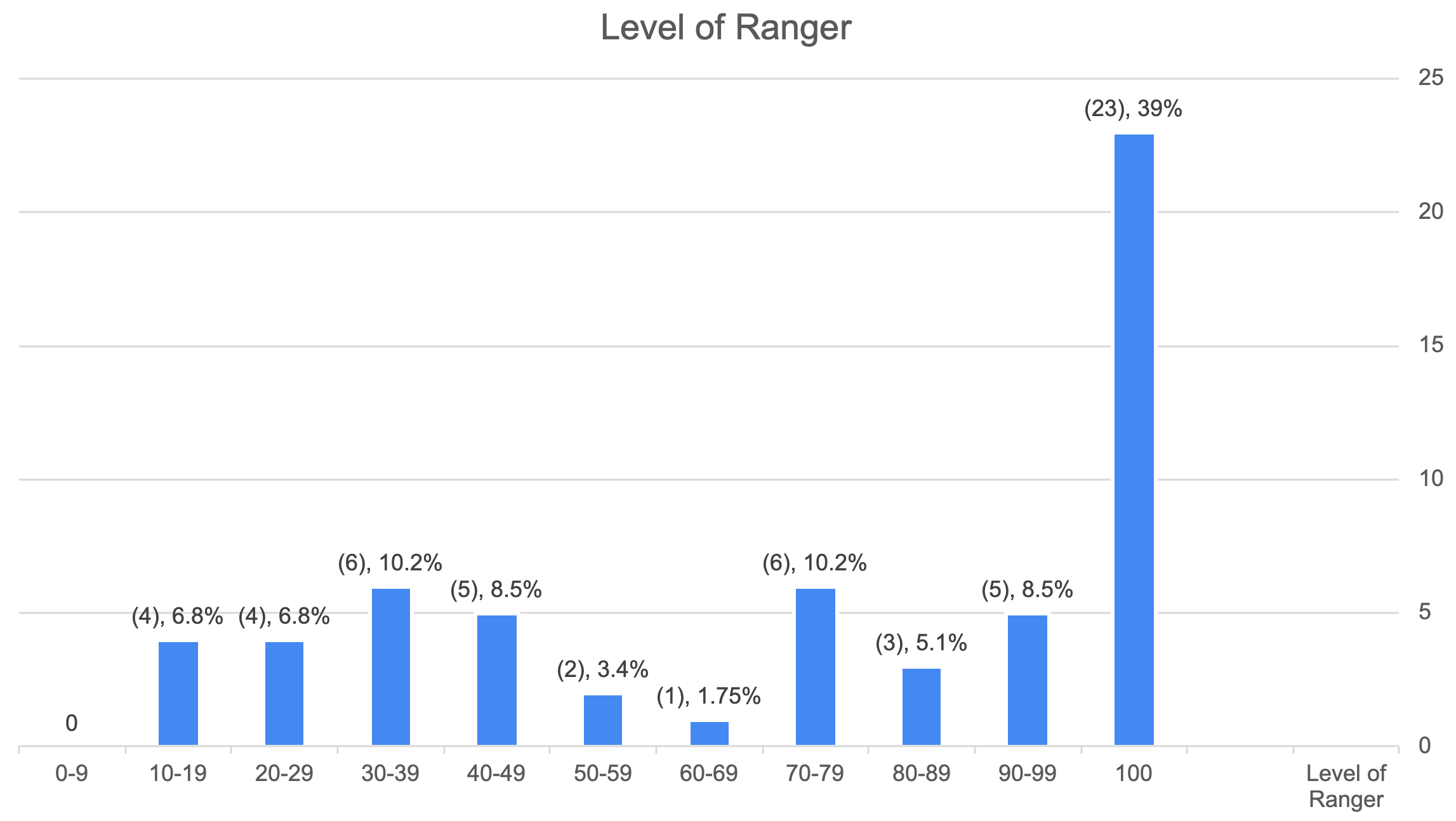 Intent Versus Actual Use 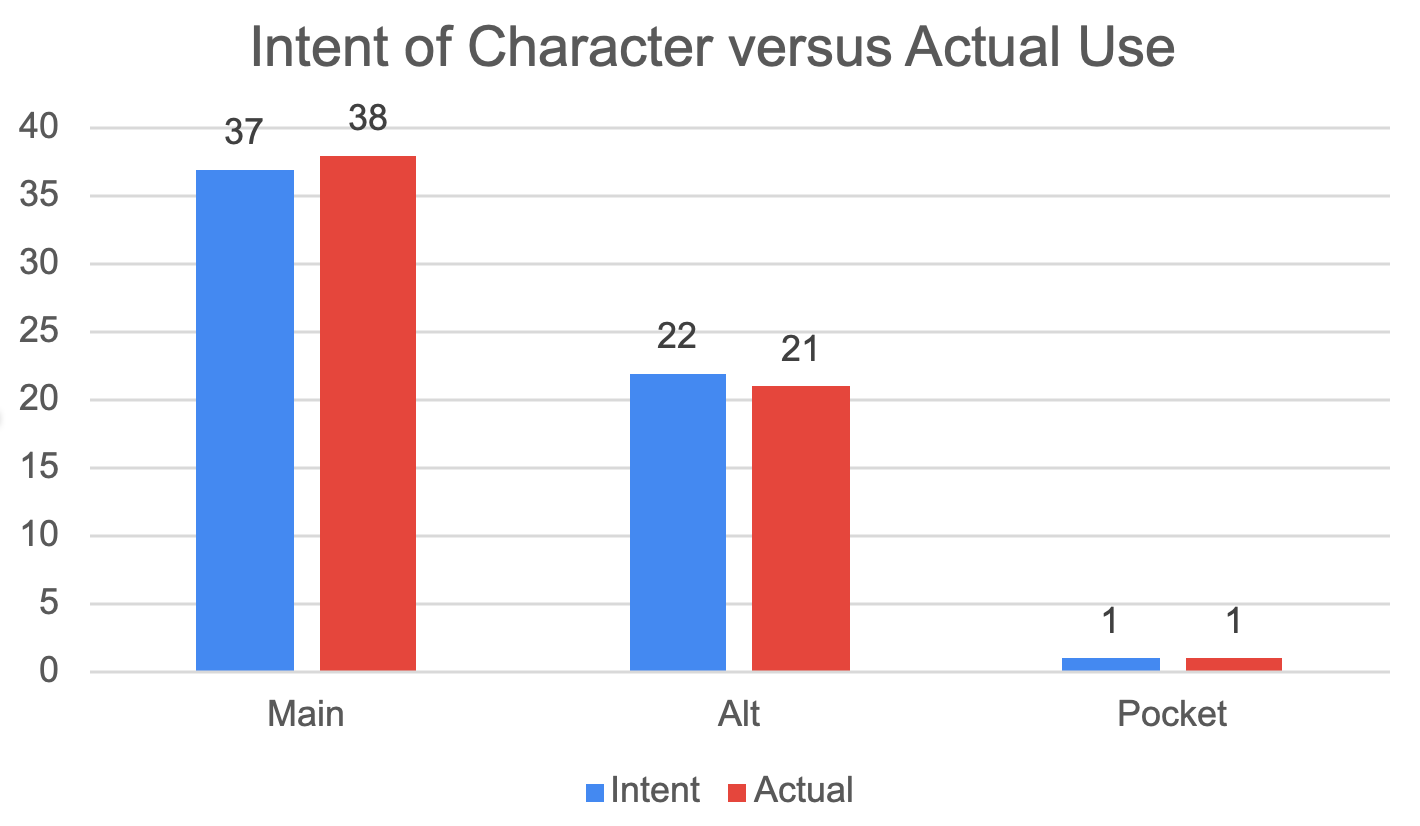 Respondents were asked if they intended their character to be a main, an alt, or a pocket rangers. Pocket rangers were defined as a character kept solely for casting defensive spells such as Mass Colors (611) and Mobility (618) on friends, imbuing rods, foraging, or some other task wherein the ranger is really there only to support other characters.

While these totals are interesting, they don’t show the whole picture of the movement between main, alt, and pocket status for rangers.

There were a few different reasons given for why a ranger was being used as a main that included enjoying the “blend of nature-attuned combat skills and magic abilities (including imbuing and armor resistance)” (Brandilor, 92), animal companions (Brandilor, 92), easier hunting (Name Withheld, 96; Morofinwe, 35), falling into more social opportunities (Seomanthe, 39), and “I really liked Spikethorn” (Qili, 75).

One respondent who had a capped ranger and changed from a main to an alt mentioned that they did not feel there was much for a post-cap ranger to do. Another mentioned disliking the arrow gathering system of archery (Olojor, 22). Conversely, one player who intended their ranger to be a pocket ranger, actually enjoyed “playing her too much and liked her character/roleplaying concept behind her design” (Finnlebec, 44) and therefore upgraded to an alt.

From the individuals who intended their ranger to be an alt and still use their ranger as an alt, there were the following comments:

This individual explained that they lost their social group and did not find the ranger engaging in solo play.

This section provides an overview of the ranger survey as well as some information about the respondents such as their length of time consistently playing their ranger, level of ranger and amount of post-cap experience if applicable, and the movement of the intent and actual use of their ranger between main, alt, and pocket functions.

The section is intended to provide some broad views on playing a ranger before delving into specifics. Questions asked how participants described rangers, how satisfied they were with playing a ranger, how flexible they felt training paths were, how unique they felt rangers could be within the chosen training path, any specific problems they were having, and any general ideas they might want implemented for their class.

This section is intended to provide specifics on how players of rangers view their class-specific skills. Questions asked about: the importance of a variety of specific class attributes and asked if the respondent had begun a ranger for that attribute or still played a ranger because of that attribute, amount of satisfaction with the combat effectiveness of animal companions, and implementation ideas to boost animal companions’ combat effectiveness.

This section is intended to provide specifics on how players of rangers manage the logistics of their hunts. Questions asked about: how satisfied rangers are with their ability to complete Adventurer’s Guild bounties, the number of characters in the rangers’ hunting parties, the types of buffs rangers use while hunting, the types of armor specializations rangers use, and rangers’ reasoning for hunting self-spelled or with outside spells.

This section is intended to provide specifics on how satisfied players of rangers are with the roleplay opportunities of various parts of their class. Questions asked about: players’ satisfaction with the inclusion of roleplaying elements into the ranger’s class development, the primary aspect of ranger mechanics that separates the class from others in terms of roleplay, satisfaction with ranger companions’ roleplaying abilities, and ideas for boosting companions’ roleplaying flavor.