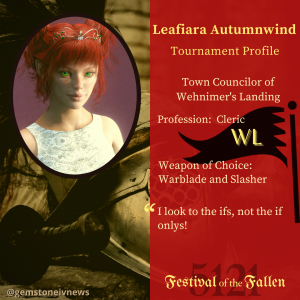 During these solemn days, we honor our fallen. As the hopelessly diverse people we are, we’ve all learned to pay respects in different ways. Some visit the temple and kneel to their gods. Some rejoice with food and drink, and remember by promptly forgetting. Some create legendary crafts and works of art. And some enter the arena to tear apart their adversaries and claim eternal glory.

Or at least bragging rights.

There’s no way around it: I’m about to be sitting across from a legend. I’m not sure when exactly the realization came for me, but it’s undeniable: the tournament combatant is a different breed. Few can truly grasp the level of dedication, obsession, sacrifice, and many…many hours of training it takes to become a gladiator champion. You’ll hear a lot about luck of the draw, both in terms of match-ups and firing off that integral first landing shot, but the fact remains, if you don’t have the muscle and the moxy to back it up, you might as well stay in stands. One such lady you’ll never see relegated to the nosebleed seats is this lady…Leafiara. Mayor, Councillor, Event Planner, Gladiator Champion. Leafiara. I’m about to sit down with a legend.

You head over to the Candle Table.
[Candle Table]
A small iron stand on the table holds a rectangular block candle. Seven wicks are spaced evenly along the top surface. Each wick fuels a small flame, glowing a warm shade of orange.
Obvious exits: out

You pull out a chair and seat yourself at the table.

You see Leafiara waving at your table, clearly hoping that you will invite her to sit with you. If you would like, you may invite Leafiara to allow her to join you.

You wave at Leafiara and invite her to come sit with you.
Event Planner Leafiara arrives at your table.

You scoot your chair back and stand up.
Leafiara waves to you.

You say, “I can’t believe i just invited Leafiara to a table.”
Leafiara chuckles.

You say, “It probably sounds crazy, but it’s just one of those things. you hear the name so many times.”

You see Event Planner Leafiara Autumnwind the Town Councilor of Wehnimer’s Landing.
She appears to be a Half-Sylvan.
She has the shadows of Tilaok blanketing her and suppressing her aura.
She is moderately tall and has a well-toned frame. She appears to be youthful. She has sparkling green eyes and pristine fair skin. She has shoulder length, tousled cherry red hair framing her face in a disheveled, carefree style. She has a well-defined, heart-shaped face and slightly pointed ears. She has alternating cherry and vanilla polish brushed onto her neatly rounded fingernails.
A myriad of ethereal confections appear to be following her every move.
Miniature yellow treble clefs spiral outward from her before fading away.
She is in good shape.
Her hands are covered in a light dusting of sugar.
Colorful, wispy threads shimmer in and out of existence, twining and dancing freely around a white imflass manacle encircling her left wrist. Its empty keyway is outlined in a bold red glow that pulsates rhythmically.
She is wearing a shimmering cherry red cloak, a leaf-spangled imflass scabbard slung over her shoulder, some shiny red zelnorn chain mail emblazoned with a large white leaf, a ribbon-laced white silk blouse, a pure white imflass manacle painted with a bold red leaf, a side-slit knee-length red silk skirt adorned with a dozen white bells, a silk-lined imflass thigh-sheath, and some showy red silk sandals laced with leaf-patterned silk ribbon.

Leafiara knowingly says, “Strange legends.”
Leafiara points a finger at her temple and twirls it slowly as she gives you a sideways glance.
Leafiara nods firmly.

Leafiara admits, “Not especially, though it’s gotten a bit better lately than it was five years ago.”

You say, “Y’know, i’ve gotten that sentiment quite a bit.”

Leafiara says, “I actually tried to start my adventuring career here, but the clerks and shop owners drove me off within a couple of days.”
Leafiara chuckles.

Leafiara whispers aloud, “It might have even been a single day.”

You say, “I mean, the Vaalorians know their reputation.”

You say, “So i think it’s really interesting they’re hosting this huge event.”

You say, “Because it’s inviting fellowship.”

You say, “So i think that’s meaningful.”

Leafiara admits, “Yeah, and it’s more or less the only time I ever come out here.”

Leafiara says, “Probably the same for more than a few others.”

You exclaim, “We gotta get you here somehow!”

You say, “And also, it’s the Festival of the Fallen.”

You say, “That must have some meaning for you, in your profession.”

Leafiara says, “You know, interesting thing about that…”
Leafiara thoughtfully taps a finger against her lips.
Leafiara muses, “How to express this…”

Leafiara says, “It’s true that when I won the tournament here, I did find a lot of meaning in being named a ‘Champion of the Fallen’…”

Leafiara says, “But in the years since then, a lot of trouble went down in the Landing and I often found myself getting caught up in vengeful feelings.”

Leafiara philosophically asks, “Every time I got too mired in chasing vengeance, someone or other who I loved would have to pull me out of it and remind me: I’m more here for the living than the fallen, you know?”
Leafiara grins.

Leafiara says, “We all are.”

Leafiara says, “An event every two years to remember is great.”

You ask, “A cleric seems to always have one foot in the grave anyway, right?”

Leafiara gazes in amusement at you.

Speaking playfully to you, Leafiara says, “Well, certainly this cleric at least. But it’s not all I am, not even close.”

Leafiara appears to be struggling to keep a straight face.

You say, “But i want to shift to the tournament.”

You ask, “Is that a standard setup for you?”

Leafiara says, “If I can get away with it, it’s the fastest path to victory, but that won’t cut it depending on how tricky the opponent gets. I have at least a dozen battle plans.”

You say, “I’ve heard the first strike is crucial.”

Leafiara says, “Though, like you said, ultimately the most important is to strike first.”

Leafiara says, “I lost sight of that one in 5119, so I got destroyed no matter how much other planning I did.”
Leafiara chuckles.
Leafiara waves her hand in a dismissive gesture.

Leafiara says, “Truthfully, I wish it was something like a best 3 of 5 setting. Then I’d just use every strategy in one tournament.”

You ask, “But would you say you tailor your attack to the individual? or moreso the archetype of the profession?”

Leafiara says, “The profession can supercede everything strategy-wise if straightforward power is the right way to go and it works, but if there’s a chance it won’t work, that’s when things get more complicated.”
Leafiara grins.
Leafiara says, “Sorcerers, empaths, and especially powerful warriors are the most dangerous threats to me… at least from what I remember of my planning two years ago. Though just about anyone could pull off the feras strategy, that worked pretty well last year.”

You say, “That’s right, you were going to tell me about a feras strategy.”

Leafiara says, “Last time, at least one or two people realized the potency of feras and brought some weapons of it.”

You say, “Those big flaring ones.”
Leafiara pragmatically says, “It works well if you can hit an opponent even lightly.”
Leafiara nods to you.

Luxelle says, “I saw someone make a case for banning feras this time.”
Leafiara says, “Full plate armor and such can only shield against so much when it’s massive jolts of lightning.”
Leafiara chuckles.
Leafiara opines, “Honestly, they probably should.”

Leafiara says, “Though there have been so many developments in weapons lately that there are plenty of other things just as deadly.”
Leafiara says, “Like low steel or xazkruvrixis.”

Leafiara says, “At this point, feras might be the equalizer for those who don’t have exorbitant cash.”

You ask, “Who’s your biggest threat?”

Leafiara says, “I’ve been at him many times in practice duels over the years. He’s more or less untouchable to me.”
Leafiara grins.

You exclaim, “Y’know, i gotta say, just about everyone picks Roblar as a favorite to win, except him!”

Leafiara says, “Well, he did lose in round one the year I won, if I remember correctly.”

Leafiara says, “Certainly if I wanted to win, I’d be hoping he runs into a ranger.”
Leafiara chuckles.

You ask, “What’s going to beat Divine Fury if you throw that out first?”
Leafiara ponders.

Leafiara says, “Which is why I named sorcerers, empaths, and warriors as the top threats to me.”

Leafiara says, “They’re the most likely to just be able to stave that off.”

You ask, “And do you have any opinion on Barkskin?”

Leafiara says, “At that point we just stall each other out, them with Barkskin and me with Symbol of Transcendence.”

Leafiara says, “I’m curious if any will try to use dispel flares to win from defensive stance.”

Leafiara says, “That could end up working very well against those who learn two spheres of magic.”

Leafiara says, “Won’t work so well against me.”
Leafiara glances upward and whistles quietly, an innocent look on her face.

Leafiara says, “And I can do it myself and am potentially prepared to.”

You say, “No doubt, dispel flares are huge.”

Leafiara says, “But short of that, they’ll have to think on what they’re doing.”

You ask, “What do you have for final thoughts?”

Stay tuned for more interviews leading right up to the moment of the tournament. Extra special thanks to Leafiara for her time and generosity.

Stonmel works on TownCrier special projects – everything from April Fools’ Day, Newsby’s Night Out murder mystery, and organizing all the items for our table at the annual Crafts Bazaar. You never know what he’ll come up with next, but it’ll be fun!

“Treason, like beauty, is in the eye of the beholder” – Garak, Deep Space Nine

Search here for some of Stonmel’s work