Have you ever wondered if lightning can strike twice? Trust me readers, it can, but only when fate requires it.

Today, I bring you a tale of glory from the high seas: the victory of Wehnimer’s Landing’s beloved healer, Giantman Empath Kiwoeachi, over her training and the fates! Many a time has she bandaged, soothed, and cured my wounds. But rest assured, she can always strike a mighty blow with her magic when necessity requires her to do so.

It all began out on the open seas, when she was hunting Krolvin pirates with her friends Bait, Carolanne, Peggyanne, Guyamon, Ithloria, Lockli, Subeta, Zreat, and a blue-black panther. Amidst a flurry of twisting creepers, powerful blows, roaring flames, and flying spears, arrows, and spells, they fought to take down the ship’s Krolvin Captain.

Any would-be onlooker given the opportunity to witness their collective wrath would have gone blind, which is one of the many reasons I am glad to have heard this tale recounted rather than witnessing it myself. As the battle approached a fever pitch, Zreat’s song assailed the Captain’s heart, and then Subeta’s katana brought him down and severed his right leg. Next, Kiwoeachi’s webbing wrapped around him, threw him to the ground, and choked the remaining life out of him. A fitting end to a life ignominiously lived.

Almost immediately—while her colleagues still searched the Captain’s crispy and sticky body—lightning began to rain down upon our poor healer as the gods celebrated her ascension to the highest ranks of training. One strike! Two! Three, four, five, six! To say she was stunned would be an understatement. Her elation was so magnetic it had attracted electrons alongside the overseers.

Bait did her best to jolt Kiwoeachi back to her regular self as lightning continued to strike our heroine of the hour. The lighting stunned her while her companions relieved her as they walked across the enemy ship, seeking the remaining pirates. Finally, the strikes ceased, and she was able to articulate her true thoughts: “Ow. Pain.”

Bait held Kiwoeachi in a beam of dappled moonlight, suspending the electrotechnics for a moment. But as soon as it faded, bam! Lightning struck her again. And again. And just as she began to heal herself properly, a huge group of looters, pirates, and the like swarmed around them!

Kiwoeachi, sadly, was the first to get hit as a halfling vagrant swept her to the ground. Lockli and Guyamon began unleashing a flurry of blows on the attackers. Carolanne, Peggyanne, and Ithloria cast a torrent of spells. Bait let loose a hail of arrows, Subeta hacked away at the crowd, and Zreat continued his songs of war. The non-biped teammates helped as well, as the panther slashed deep into a half-krolvin vagrant. Kiwoeachi herself used her magic to inspire deep fear in the enemies.

Wave after wave of enemies continued to sweep through the ship. (That, of course, is why I normally tend to stay behind until the coast is clear.) Even as the enemies descended upon them, several party members began looting the previous waves’ bodies—a temptation we all must resist. Much like the lightning outside, indoors the pirates began focusing their attention on Kiwoeachi, knocking her to the ground and barely missing her with a variety of pointy weapons. In revenge, she used her magic to force her golden sympathy into their eyes and wrap them in an empathic link. With a mighty scream, she incinerated the wave with a roaring ball of flame.

They climbed up into the crow’s nest to wrestle a hulking krolvin warlord and a menacing triggerman and dropped both targets before heading back down to loot more bodies and kill more targets. Rinse, repeat.

Just as Kiwoeachi realized she had not yet had time to train, another wave of enemies rushed her, bashing her and bringing her to her knees. The injustice! Zreat pointed out—correctly—that the pirates were upset with her, personally. Just as she got another moment to heal herself and exclaimed how crazy these events were, a group of reivers rushed in as well, as if the gods themselves were testing her.

If so, their test was met. The team threw jabs, fireballs, disintegration beams, sizzling plasma, and some well-earned scorn as Kiwoeachi released bolt after bolt of webs, disabling, grounding, and killing her latest foes. Peggyanne claimed that the reivers were on the “good” side because they tend to slay the Krolvin, but Kiwoeachi’s skepticism showed both in her words and her actions as she slung one web bolt after another.

Just then, a large-eyed cyclops titan joined the fray and immediately became the target of all involved. Zreat brought it to the ground with a great sonic wave while Guyamon and Lockli pummeled it. Bait let loose more arrows, the twisting keepers entangled it, and Kiwoeachi continued her volley of webs, hitting the titan again and again. Peggyanne bathed the creature in her violet flames and slashed it with her spear, releasing ethereal dragon eels whose mouths dripped with fiery-hot magma, and Carolanne shattered one titan bone after another in a mighty show of mystic strength. Ithloria threw her fireballs as Subeta cut into the titan again and again and Zreat ripped the creature open with his songs and a brilliant beam of plasma. Even the panther joined in, taking out juicy chunks of cyclopean meat. With a final swing of her katana, Subeta slashed the titan a final time as she cut open its spleen and brought its life to a premature end.

Before they could even catch their breath, a ki-lin appeared and quickly met the group’s immediate wrath. Peggyanne delivered the killing blow with a quick bash of her pavis to its neck. Its valuable, magical horns went to waste in the melee before they could fully process what was before them. Only then did she and Kiwoeachi realize what they had done. Lockli shook his head in grief.

But they could not linger over the thought, because a muscular Krolvin warlord shuffled in and prepared to spell them all! Naturally, the team took their angst out on him, although their anger made him somewhat harder to hit. So Kiwoeachi used her magicks to terrify the latecomer, who fled in fear as she waved him a snarky goodbye alongside a well-timed quip.

Quickly, a dark robed doomsayer shuffled in to take the warlord’s place. Surely, this would be the last beast to challenge them, no? Lockli started off with a few misses before making a few major connections with his fists. As Guyamon took his turn pummeling the doomsayer, Kiwoeachi froze it in its tracks in fear, in a perfect mirror image of the calm she normally inspires in the Town Square. Clearly, her healing magics go both ways. Zreat’s skillful voice pummeled it to the ground, the panther pawed at it, but Bait had poor luck, each arrow going wide—but to be fair, we all have our moments. Luckily, Guyamon and Lockli continued to pummel it as Kiwoeachi unleashed an empathic assault that burned through its hand and took its life before it could trace one final sigil.

Fate had yet another surprise in store—another ki-lin! But a mere flurry of blows from Guyamon and a single chord from Zreat felled it before it could do more than feebly attempt a bite at Kiwoeachi. This time, Lockli searched it before Bait could say “Stop, stop, no! Ki-lin horns are stupid rare.” Someone laughed so hard that they fell overboard as Bait sighed and Kiwoeachi giggled and shrugged.

“And a giant clops,” Zreat added. Which, as Peggyanne pointed out, one could also have called a “giantitanclops.”

“I am the poorest person in the lands,” Kioweachi lamented sarcastically. As the team wondered debated whether the ship they were on had been using whales or narwhals to drag it, they united int their congratulations of Kiwoeachi on reaching the pinnacle of her training amidst such a glorious battle.

“I don’t know about you guys, but that was awesome,” she admitted.

Peggyanne agreed, summing it up best: “This is what we a call a sea story.” 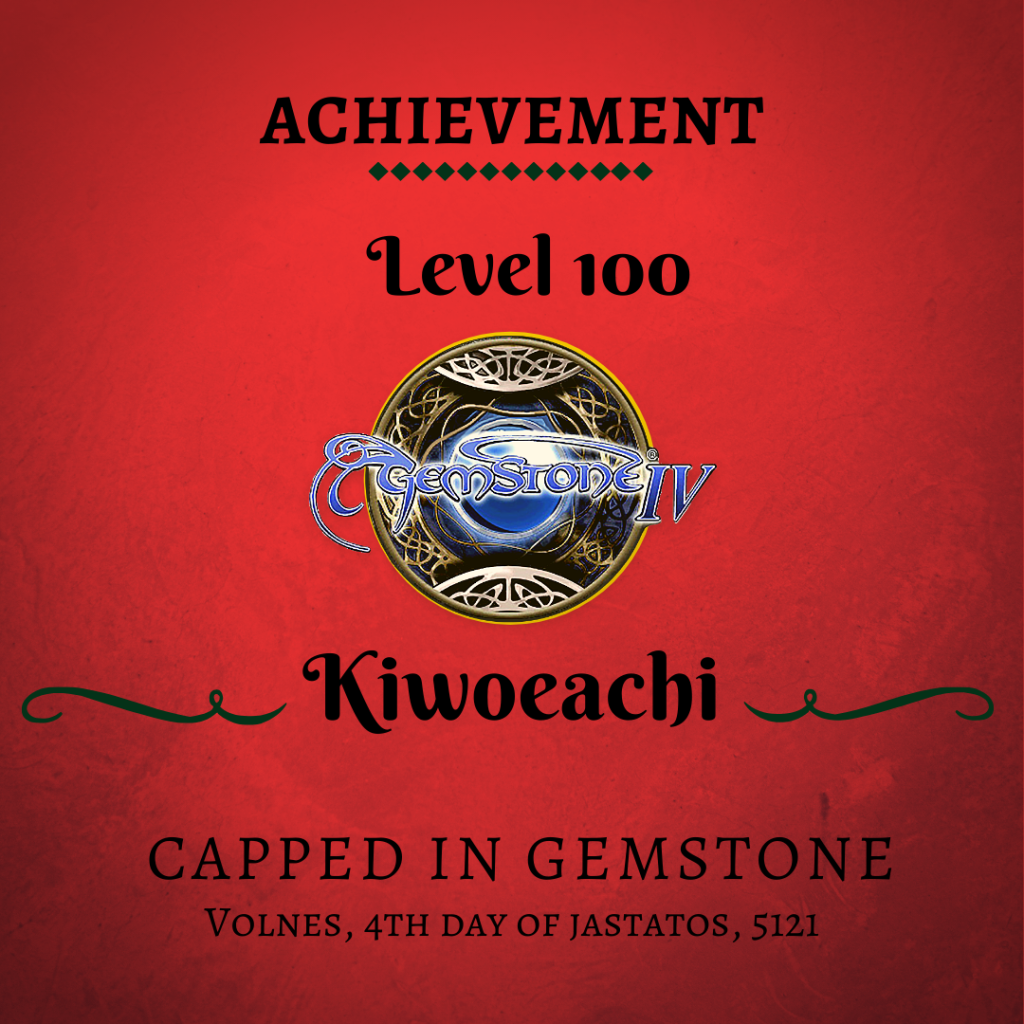 Aymar is a wizard who is recently returned to Elanthia. A native of Wehnimer's Landing, he enjoys adventuring, spellcasting, fireweaving, instigating revolution, and reporting on it all.
Tags: CAPPED, kiwoeachi, level 100, lightning, ocean adventure

Lynaera lives and reports on the goings-on inside the Fortress of Ta’Vaalor. From regularly planned events to social gatherings to the surprise attack, she keeps her ears open and her finger on the pulse of this dynamic Elven city.

Lady in Waiting: A lady-in-waiting or court lady is a female personal assistant at a court, royal or feudal, attending on a royal woman or a high-ranking noblewoman.

Search here for some of Lynaera’s works