Insights, Ruminations, and 605: Posing the Hard Questions to Arena Hopefuls

In my search for this year’s Festival of the Fallen Arena Tournament Champion, I had the chance to chat with just a few of those brave souls planning to sign up. Adventurers hailing from all over Elanthia are trickling across the mountains in search of glory and alterations, and I was right there, pen and vellum in hand, to sup their wisdom and steal their secrets. 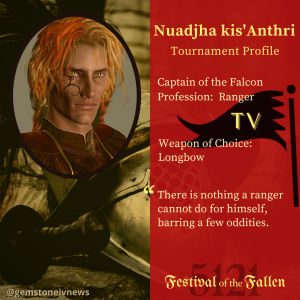 Captain Nuadjha needs no introduction. Because he has a freakin’ airship.

Dezter: Here we go. Who’s the one to beat?

Nuadjha: Roblar is always the one to beat. Also, Leafiara, since I think she won last year.
D: As a ranger, do you have thoughts on the change to 605?
N: 605 is a great defensive spell and may make a difference. However, the victory often goes to the person with the first spell off. Playing defense is a good way to die. Tactically, if a ranger has the opportunity to cast 605 or 616, 616 will likely have a much more effective result. However, if you can force the opponent into RT, 605 could be a good follow-up move before another attack.
D: What’s your favorite opening strategy? Does it change drastically depending on who you’re facing?
N: If I’m facing a physical opponent, I’ll just spike thorn them. If it’s a caster, I’ll probably just spike thorn them. I could potentially try to hide and snipe, which is a great CvC strategy, but like I said, it’s usually the first hit that wins.
D: Do you like Ta’Vaalor? I’m pretty excited about the festival because I happen to live here.
N: Ta’Vaalor is only slightly less obnoxious than it used to be. At least you don’t need ID papers now. 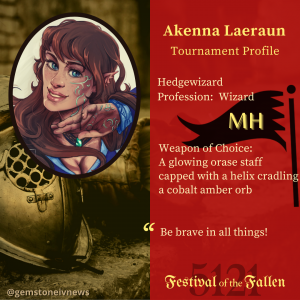 Dezter: Y’know you’re the first wizard I’ve spoken with, so far anyway. Who’d be your first choice for an opponent?

Akenna: I think honestly? I’d want to go up against a cleric.
D: Please elaborate.

A: They are interesting, I find their spells to be wholly driven by blessings, rather than the elements, they are completely opposite from a wizard, really. Where I give homage to the elements, they put their faith in a deity to aid them. I find that fascinating.

D: You competed in 2019.
A: Well, I believe I was the lowest level character there weren’t many to compete against so I won a lot by default and got rather savagely spike thorned by Anarquendi!
D: What train were you?
A: I believe at the time I was 40. I’m not in it to win it, really. I just want to see how far I can get, that’s the accomplishment for me!
D: Feelings on our hosting city?
A: I spent a lot of my earlier time in Ta’Vaalor, they are so friendly there and everyone knows everyone else.  I always love to come back to visit, it’s like coming home.
D: Will you be honoring or thinking of anyone at the festival of the fallen? Or just getting drunk, shopping, and playing games?
A: I will be honoring and thinking of those lost this summer in Mist Harbor.
D: Final words?
A: Only that I hope everyone has fun!
D: I look forward to watching you eviscerate your enemies with a cheery smile. 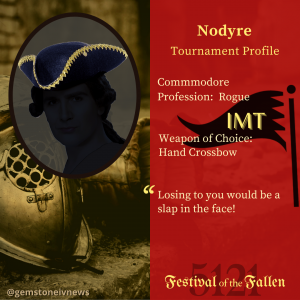 Nodyre, self-professed Cher of rogues (and proud of it), doesn’t mince words when it comes to strengths and weaknesses.

Dezter: A rogue! Awesome, my first rogue. Not meaning any disrespect, I feel like I haven’t seen a whole lot of rogues on the leader boards. Not a lot competing maybe?

Nodyre: Rogues are terrible, that’s why.
(Laughs)
D: Well I’m sort of running it thru my head, and I am DEFINITELY not an expert…But I’m thinking like, not a warrior…and not a waggler…So what’s the advantage for the rogue?
N: Stealth and maneuvers. There are a number of maneuvers that only rogues can learn, which makes them very difficult to defend against.
D: And to that point, I’ve heard a lot about that all-important first shot. But then, if the first round misses, things can get a little interesting.
N: Hence the value of stealth. If your first action is to pop into the shadows, you’re setup for a bit more time to work with.
D: Any profession you’re hoping to not meet in the first round?
N: Warrior. They’re particularly challenging to take down without a huge bag of tricks.
D: You got any new tricks this year? Without giving them away, of course!
N: Definitely. I will be making great use of the new updates to rogue maneuvers. I won’t have the attack strength to best many a contender, but my skills with maneuvers are second to none. 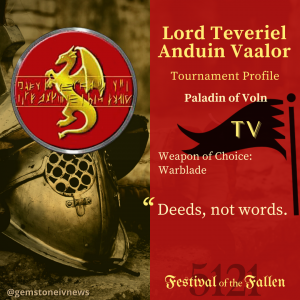 Finally, Lord Teverial Anduin Vaalor, Paladin of Voln, didn’t have to travel far for this tournament.

Dezter: As a paladin, I imagine the festival of the fallen carries some meaning for you?

Teveriel: It is a time of remembrance for the people of my House. For myself personally, it is a time to recall comrades of old; those who passed beyond in service to our King and country. I fight to honor them.
Dezter: Paladins are relatively new to the world. Is that an advantage in the tournament?
T: There may be some advantage in unfamiliarity. I believe that even among the more experienced of fighters, there remain a number who underestimate the abilities of a Paladin. To their eyes, we are naught more than less hardy warriors with prayers on our lips. I cannot say to what degree this will avail me in the tournament, but I do mean to exploit it if I can.
D: Y’know, in my mind…some of the most devastating competitors are warriors and clerics. In some ways, paladins are the best of both worlds! Would you say you have tailored strategies for different professions? Different individuals?
T: In some ways, I would agree. A cleric is a formidable spellcaster with sizable knowledge of spiritual craft, and my spells would be unlikely to pierce their defenses. For such an adversary, I would resort to other skills–a well placed shield bash, a shoulder charge–I may have at my disposal. Against a warrior, I would be more likely to employ my spells.
Would that I could be more specific, but I think it would be unwise to tip my hand so close to the start of the tournament.
D: Is there a profession you DON’T want to pair up with first?
T: Heh. I would rather not meet a ranger in the first round, if it can be helped. I have been warned about the ferocity of Anarquendi’s Spike Thorns.
D: The man is a freak of nature. No pun intended.
T: Mm. But if I must face him in the first round, I would rather he do me the honor of not holding himself back.
Stay tuned for my final collection of interviews leading all the way up to the beginning of the tournament. Extra special thanks to all participants for their generous contributions.

Elysia haunts the official GS Calendar of events to make sure they get added to Newsby’s lineup of events. Even when we are given less than 24 hours notice at times! She also runs the Item of the Week Feature to celebrate all the weird and wonderful things to be found in Elanthia.

Elysia generally spends her time wandering around the world with a certain Sylvan Forest Lord who is only slightly more directionally challenged than she is; which is to say, they are often walking east when they think they are walking west. They seldom stay in one place for more than a few weeks, and prize good company and memorable experiences above all else.

“The journey not the arrival matters.” – T.S. Eliot

Search here for some of Elysia’s works